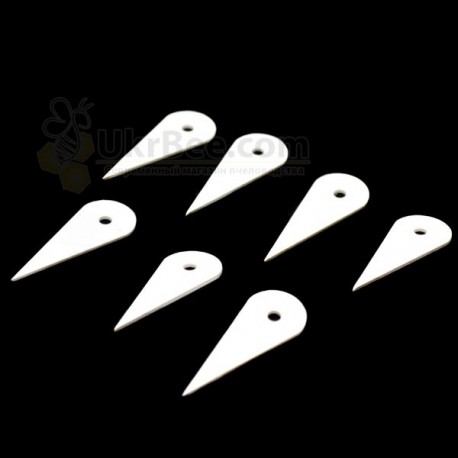 Fastening allows you to quickly and securely fix the bowls. Suitable only for a bowl made in Czech Republic

Beekeepers, who are engaged in breeding of queens or getting royal jelly, have long been familiar with Czech-made mussels, with the help of which milk is produced and the uterus is taken out. Not so long ago, to install such bowls, it was required to make a special cut on the frame, into which the legs of the bowl were subsequently inserted.

The main problem of such an installation was that not all the frames had the same propyl for installation of Czech-made mussels, and not infrequently had to do it by hand. Thanks to the experience of beekeepers from all over the world, the Czech manufacturer has produced a special fastener for its bowls, which many times simplified the process of installing the bowl, moreover, now the bowls can be placed directly on the honeycomb.

This became possible due to the special shape of the pegs for fastening, which have the shape of a peak. One end of the peg is rounded, with a special hole in which the bowl is attached, the second end of the peg is sharp, which allows you to fix the peg with the bowl directly on the honeycomb.