Special beekeeping spatula for collecting royal jelly with a collapsible design for ease of use and cleaning. 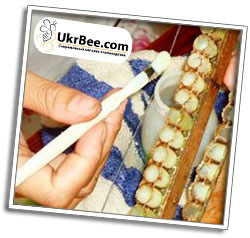 A fairly good direction in beekeeping is the occupation of royal jelly. Such beekeepers are often called "milkman". But for home use the task seemed quite complicated and the difficulty was the lack of beekeeping equipment for collecting royal jelly. To date, such problems do not exist and now everyone can collect royal jelly in their own apiary.

To collect royal jelly, a special device is used - a spatula with a special rubberized spatula made of food material. The use of such a simple device allows you to collect milk from the uterine bowl in a matter of seconds, and with a large and constant number of queen cells put MM production on the flow. The scapula itself is removable and should be cleaned and dried after use. The plastic handle is very convenient to use, and at its base (near the scapula) there is a metal tip for giving a special stiffness to the scapula during the collection of royal jelly.