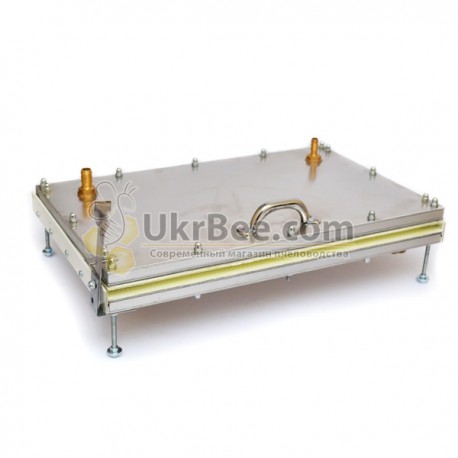 The press is able to make wax under the frames of the type "Ruta" and "Dadan". The device has water cooling

This model of the press, developed by a well-known Czech company "Apiart", engaged in the production of a variety of equipment sold in Europe. Press makes it possible to produce a wax of two standardized sizes

In the process of processing 1 kilogram of wax, you get 10 sheets of honeycomb type "Dadan"

Working with the press

First of all, it is necessary to install the press in a horizontal position, it is desirable to use the level. On the one hand, the press has special legs on the thread, which will help you fix it on the table. Cooling wax is carried out by feeding cold water into the cooling tubes of the press that pass under its skin. Passing through them, water will quickly and evenly cool the wax. The water should not be too cold and should be supplied under not high pressure, in order to avoid the depressurization of the device.

During the work of the press, excess wax will flow out, which is collected in a pallet placed under it (the tray is included). Also, along with the press comes a measuring cup, allowing you to measure the uniform amount of wax being poured. To work with the press, it is advisable to use a small spatula to cut off excess press on the sides and lift the finished wax sheet.

The process of pouring wax into a press is very simple. It is necessary to raise the top cover, opening at an angle of 100-120 ° relative to the bottom, and pour the desired amount of wax using a measuring cup. Do not need to pour all the wax in one place, it is advisable to pour it over as much as possible of the press area.

Having such a press, you can produce your own wax, without impurities and other additives. Such a wax is many times better taken by bees, and contributes to the construction of better honeycombs, in contrast to the purchased honeycomb.

Press allows you to get from 40 to 60 sheets of clean honeycomb per hour.

It is forbidden to disassemble the press, the reverse assembly will not be possible.

If you have any additional questions, please call us, we will be happy to answer them.